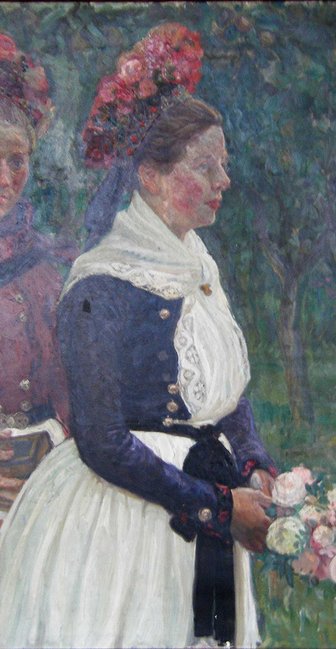 ARTISTS OF FANØ
THE COLLECTION AT FANØ ART MUSEUM

Fanø Art Museum’s collection represents a special subsection of Danish art history from 1849, until the present day. The artists come from Denmark, Germany and Sweden. Their common aim was a desire to be intensively occupied with their artwork on Fanø.

Fanø Art – Between seclusion and vision

The Fanø Art Museum’s exhibit with its diverse and numerous collection that the term Fanøart easily could describe the works of art produced by generations of artists who lived on the island. However, you will not find a definite school of art or an artist’s society, that you may find among the painters from Skagen and Funen in the beginning of the 20th century. When people are talking about Fanøart it is more considered as a collective description for works created as an interplay with the island and its people over more than 150 years.

However, Fanøart is not an expression for a specific style or opinion of the artworks. The joint designation more likely covers the fact that the artists created their works in close connection with the nature of the island. The artists used the landscape as a starting point and found inspiration in the greatness and diverse natural landscape on Fanø – from the white beaches to the tall dunes and the wind-swept heathlands. They reproduced the impressions either naturalistic on the canvas or deciphered into a somewhat abstract projection. Notwithstanding, mood and style, the dramatic light and the stillness in the landscape of the island are not denied in the paintings.

The collection at Fanø Art Museum includes last, but not least, a culture-historical documentation of the island’s artistic development. A lyrical tale about artists who discovered a refuge at Fanø where they could – and still can – become deeply absorbed and lost in their work. Surrounded by the sea, and with the ferry crossing as the only public access, they arrived at the island in order to find peace, inspiration and isolation to further developing their art, where they can be far away from large cities. However, with still shorter travel-times to the great cities, Fanø is the starting point for a series of artworks, that can be experienced at Fanø Art Museum.